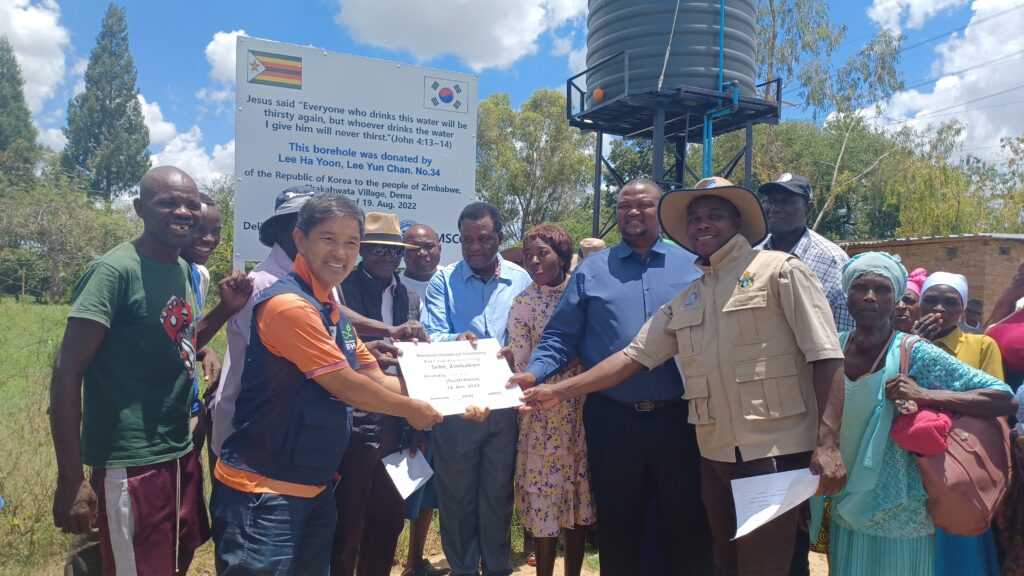 It was a happy day for the Chakahwata villagers who had a solar-powered borehole donated to them by Korea Food for the Hungry International and Upper Maname Sub-Catchment Council.

The handover ceremony took place on the 12th of December 2022 in the Chakahwat village in the presence of the villagers, Councillors, Headman, and Chief.

Pastor Hyeon, the representative of Korea Food for the Hungry International, said that he was proud to have donated the borehole to Chakahwata village on behalf of the organization.

“We have donated 30 boreholes so far in Africa, and I am proud that Chakahwata village is one of the places that have received a borehole,” he said.

Access to clean water is one of the major challenges being faced in Harare and satellite areas, including Chakahwata Village.

Mr, Mushita, the Vice Chairperson of the Upper Manyame Subcatchment Council urged the Chakahwata residents to be united and ensure that the Borehole is well maintained and protected from vandalism and theft.

“It is my plea that a Chakahwata Village water point committee be established and be responsible for the upkeep and protection of this borehole,” said Mr. Mushita.

A borehole committee was elected and the chairperson vowed to ensure that the borehole is well maintained at all times.

The CEO of Upper Manyame Sub-Catchment Council, Engineer Muchineri, reminded and urged the villagers not to discriminate against other people from using the borehole because of their political affiliations.

“Let us ensure equitable access and sharing of water to all in need of it regardless of their political affiliations,” he said.

As Pastor Hyeon handed over the borehole, he informed the villagers that he had taken a sample of the water to the lab and it was cleared of E coli, meaning it was safe to drink.

With the borehole now in place, the village residents now have access to clean water which will also improve the quality of lives.

Upper Manyame Sub Catchment Council (UMSCC) is a statutory water management body in Zimbabwe established by an Act of Parliament; Water Act of 1998 (Chapter 20:24) under the auspices of the Ministry of Lands, Agriculture, Water, Climate and Rural Resettlement

We accept the following payment: